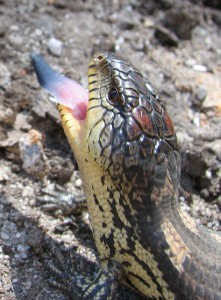 The Lizard with the Amazing Blue Tongue

When threatened, these lizards will inflate their lungs, causing the body to swell and making them appear larger. The blue tongue lizard may turn towards their aggressor with mouth wide open, displaying a startling blue tongue and pink mouth. They then exhale, creating a hissing noise and causing the body to deflate.
Blue tongue lizards eat a variety of plant and animal materials including fleshy leaves, flowers and fruits, large insects and snails.
Blotched Blue-tongue Lizards do not have a venomous bite, but they are capable of biting very hard. Individuals are vulnerable to attacks by dogs and cats and to poisoning by snail bait.
The Eastern Blue Tongue Lizard is an iconic Australian reptile. Watch the video below and learn about what makes the Blue Tongue special and why the environment is important to them.

The Royal Spoon Bill has an amazing spoon shaped black bill and white feathers. Very long legs enable the spoonbill to wade through the water.
When breeding, long white feathers grow from the back of their heads.
The spoonbill eats fish and other water creatures including crab, shellfish, and frogs. It catches them by making a side-to-side movement with its bill.

The Blue Spot Goby will dig a burrow beneath a stone or tree root, and may be seen with only its head protruding from the burrow. Females lay up to 150 eggs which are attached to the underside of the roof of the burrow. Males remain with the eggs, fanning and defending them.

The Blue Spot Goby Light is tan to greenish above, lighter underneath with 5-6 brownish blotches on upper body. Maximum size is 7 cm, generally up to 3.5 cm in Victoria.

About 90 million years ago a group of tiny fish called Galaxias lived almost side by side with the dinosaurs. Many, many years later, those amazing little fish are still with us.  Also known as the Gondwanan climbing fish, these little fish are about 150-170mm long, greyish brown to dark olive in colour.

They have special downward facing fins so that they are able to climb rocks as they make their way upstream in rivers and creeks to breed.

Eyes, and other amazing features, of a Dragonfly

Dragonflies spend most of their lives as larva in water. Larval dragonflies breathe by sucking water into their abdomen. Mostly they are slow moving and rely on camouflage for protection. However, when threatened, they can squeeze the water out with enough force to jet propel themselves forward.
Adult dragonflies have four powerful wings that can operate independently or together enabling flight speeds of up to 5o kph. Few other insects can match the speed and maneuverability of the dragonfly.
Dragonflies have enormous eyes with tens of thousands of tiny lenses. The head of a dragonfly can swivel almost 360 degrees to provide panoramic vision. Dragonflies eat mosquitoes and other insects.

Short finned eels have been known to go without food for up to 10 months! Eels eat fish, worms, insects, small crustaceans, molluscs and water plants.
Mature eels can be up to a metre long and may vary from 6 to 24 years of age. Eels spends most of their life cycle in fresh water and migrate downstream to spawn at sea when mature.

We’ve been wanting to tell the story of our short finned eels ever since a major pollution event hit Dandenong Creek. This short film touches on their amazing lifecycle, what the eels meant to our indigenous nations, and how urbanization is affecting them.

The ABC video below depicts the amazing journey of the long finned eel.