Posted on 14th March 2019 by kananookAdmin

It’s that time of the year again.  The KCA AGM is almost with us (April 3rd 2019, 8.00 pm at Seaford Community Centre) so here’s the formal notice of meeting and a bit of a plea for your active involvement.  At least two of the KCA committee won’t be standing for election, including Paul, KCA President, so there are a few places to fill to ensure the Association has a functioning and effective committee.

There are at least two really major issues on the horizon, namely the toxicity levels in the creek and getting Frankston City Council to take some ownership of their management role of the creek. 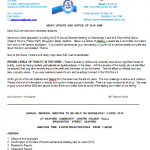