Posted on 7th February 2015 by kananookAdmin

A mosquito program has been put into place to conduct monitoring and coordinate management actions to:

What happened in the past

Seaford wetlands are the main target of the mosquito program. The wetlands have been monitored in September and October and larvacite briquettes have been distributed in the Southern part of the wetlands. The briquettes mimic the mosquito juvenile hormone and disrupt the development of larvae and pupae in the water with minimal impact on other fauna. They act for up to 150 days.

As a part of the monitoring program adult mosquitoes were collected in December 2013 at opposite corners of the wetland and sent to DEPI labs for enumeration and identification. The larvae and adult numbers were relatively low in numbers and did not pose significant risk to the residents.

The Seaford wetland was monitored on the 19-20th January 2015. Almost no larvae and very low number of adults, less than 24 in each trap were detected. This is despite significant amount of rainfall occurring in January and medical entomologist at the University of Sydney declaring that January weather constituted “the perfect storm” conditions for mosquito outbreaks. 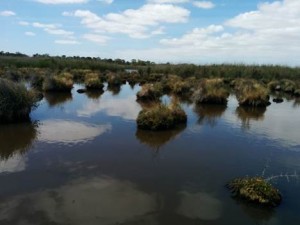 What will happen during the rest of the year?

During the warm months of the year we will continue to monitor the wetlands monthly or more frequently, if we receive a number of mosquito related complains in the area. Adult and larvae will be monitored. Adult mosquitos will be sent to DEPI labs for identification and examination for arboviruses.

DEET, N,N-Diethyl-meta-toluamide, also called DEET (/diːt/) or diethyltoluamide was developed by the United States Army, following its experience of jungle warfare during World War II in 40s and 50s.

The prevailing theory was that DEET effectively “blinds” the insect’s senses so that the biting/feeding instinct is not triggered by humans or other animals which produce these chemicals.

However, more recent evidence shows that DEET serves as a true repellent in that mosquitoes intensely dislike the smell of the chemical repellent.[6] A type of olfactory receptor neuron in special antennal sensilla of mosquitoes that is activated by DEET, as well as other known insect repellents such as eucalyptol, linalool, and thujone, has been identified.

A highly conserved protein member of the ionotropic receptor family, IR40a, has recently been identified as a putative DEET receptor in the fly antenna. The neurons expressing IR40a respond to DEET in an IR40a dependent manner. Avoidance to DEET vapours is lost in flies that lack IR40a. Other repellent chemicals that are structurally related to DEET also activate the same receptor and repel mosquitoes and flies, suggesting that this receptor can be used to screen for new repellents.

This entry was posted in News, Waterway and tagged mosquito, seaford wetlands. Bookmark the permalink.